Shadows have a sinister reputation. They are where dangers lurk – their disquieting darkness shrouding unknown evils and potential predators. They are illusive, ungraspable and always changing position. Like the uninvited glance of a stranger, what lies behind a shadow is often unknown, and its interpretation requires some level of imagination. Shadows don’t represent a definitive threat, but only the possibility of peril. Evidenced by their use in conjurers’ magic shows and that most ancient form of puppet theatre, they are tricksters of a sort – evasive, yet suggestive – and as easily associated with play as they are with pitfall.

In Pavitra Wickramasinghe’s current exhibition, Time Machine, at Concordia’s FOFA Gallery, shadows are employed as medium and share the space with drawings, sculptures, video and found objects. Cast against softly lit walls in the uncommonly dark gallery, Wickramasinghe’s shadows are more soothing than scary. Not the least bit threatening, they imbue the exhibition with a dreamlike quality, both peaceful and playful – the success of this pairing attested to by the widening eyes and wondrous fascination of the few children present at the vernissage. The show as a whole is quiet, calm and comforting and reveals the affective and under-acknowledged strength of subtlety. 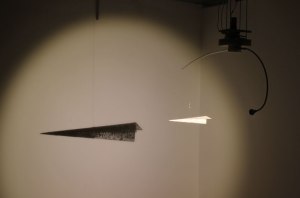 The installation, Take hold lightly, let go lightly (2013), occupies a significant portion of the gallery space. A trio of paper planes, embellished with laser-cut patterns, is suspended from the ceiling, concentrically moving in consort with carefully trained, individualized lights. As the planes smoothly circle the space, their overgrown shadows are cast in mirrored movement across the gallery walls, sliding like silk slowly drawn across the bodies of spectators. Standing amongst these lazy airplanes is like being lulled and hypnotized by a mobile hanging above an infant giant’s crib. The circling shadows are reminiscent of those cheerfully coloured zootropes set beside our own childhood beds. A single image is mounted on the wall and illuminated – a sheet of intricately cut and patterned paper, revealing the pre-folded appearance of the paper planes. 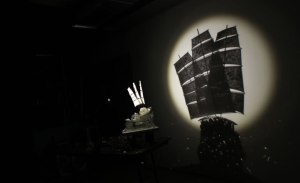 Silence of Thought, Music of Sight, 2012

In an adjoining room, a sculptural form composed of natural and crafted crystals, glass and metal sits atop a plinth and casts a ship-like shadow against the wall on which a video projection is displayed: a reel of seascapes, expanses of water and less definable imagery that could just as easily be earth or outer space. At times temperate and at others tumultuous, the video suggests an impossible journey through disparate times and spaces and, whether enlarged and centered upon the projected sea, or dwarfed in the face of crashing waves and whitecaps, the shadowy ship remains steadfast in the storm.

In addition to these more immersive installations, the exhibition includes a number of framed objects and images that necessitate close and careful scrutiny. A pair of alternative photographic prints produced with the cooperation of the sun depicts imperfect ovals, luminescent against a dark background, that look like dated and romantic renderings of asteroids or planets. Close engagement with the prints reveals crosshatched pencil marks that are repeated in a number of ways throughout the exhibition.

Two series in particular bear traces of similar mark making and are titled Line Poem – Crystal Study and Line Poem – Alchemy of Light respectively. The first includes a collection of diptychs that pair small sculptural objects – ivory coloured Epsom salt crystals in the form they naturally take when dried – with pencil drawings that trace their shapes and expand outwards imaginatively.

The lattice like pattern in the drawing is so clean and precise that it appears more likely the product of computer graphics than the careful composition of an artist armed with a pencil and a magnifying glass. (Wickramasinghe shyly admitted that she has a lot of patience). Displayed directly across from the diptychs is the series Line Drawing – Alchemy of Light. In each of its iterations, sheets of stacked paper were put through a laser cutter and incised with triangular cuts of various scales. The resulting objects, intended (according to the artist) to be like extensions of the pencil patterns in Crystal Study, look like labyrinthine environments with an intricate system of fences or fortresses. Their complicated architecture reveals innumerable inconsistencies and unexpected details the longer they are inspected and their multi-layered topography appears to go on forever. When standing as close as we were for an extended period of time, it is easy to forget that these objects are made of paper. The burnt edges where the laser struck are brown and brittle and thinner strands have been so fried and dehydrated that they have taken on the consistency of wicker or straw. With only their tops tacked to the wall, a simple sigh or deep breath causes the sheets of paper to flutter and move like the folding bellows of an accordion. As with many of the included works, there is something anthropomorphic about Alchemy of Light and the way that it reacts to its environment.

The exhibition as a whole appears to have an ecology all of its own wherein the objects, images and installations are both formed by, and generative of, light and shadow. If we are thinking of the alchemy of dualities, we can also talk about the curious blend of anachronism and futurism at work here. The show’s title, Time Machine is apparently a reference to the artist’s fascination with American physicist Ronald. L. Mallett’s theory of time travel based on already existing laser technology. It was surprising to learn that this Mallett is not some semi-mythical 19th century character whose dreams of time travel inspired artists and Symbolist poets more than scientific possibility and further research, but is indeed contemporary. Serving in the U.S. Air Force during the Vietnam war and having taught physics at the University of Connecticut since 1975, he has devoted his life’s work to rendering realistic the possibility of time travel. The fact that this seemingly retro form of futurism is being actively pursued in the present arguably affirms that wonder and imagination are still powerful and transformative forces.

In an analogous way, Wickramasinghe’s deft and poetical use of futuristic tools and material craftmanship has created a space that seems almost outside of time. There is a certain sense of groundlessness: we are suspended and circulating like the paper planes.

Like Laurent Grasso’s Uraniborg, which we wrote about in a previous post, there is, in Time Machine, a strong link between the manipulation of time and the way the exhibition is presented: a darkened space wherein objects—difficult to place in time and provenance—are illumined so as to compel us to move closer and really look. It’s as though each stop made is a separate event, unanchored to any rubric of linear time. The time-twisting in Uraniborg is heavier, however, owing in part to its (post)apocalyptic undercurrent, its disorienting darkness, and the illicit intersections of its maze-like architecture. Wickramasinghe’s thoughtful exhibition, on the other hand, reminds us that there is a lighter side to time travel and shadow play: it is the power of imagination and the ecstatic state of wonder that is so natural for children and so easily abandoned with the ascent into adulthood.

Unauthorized use and/or duplication of this material without express and written permission from this blog’s authors is strictly prohibited. Excerpts and links may be used, provided that full and clear credit is given to Reilley Bishop-Stall and/or Natalie Zayne Bussey of Passenger Art with appropriate and specific direction to the original content.
Loading Comments...
Comment
×
<span>%d</span> bloggers like this: